Since 2019, the UNC School of Education has partnered with LatinxEd to create opportunities for North Carolina’s Latinx students to thrive. LatinxEd, an organization started by two Carolina alums, has created new opportunities for those students to make their way to college and to then graduate and become community leaders — all while celebrating their cultural identities.

Like many high school students, Elaine Townsend Utin (’12 B.A.Ed.) needed help when applying to college. What should she put in a personal statement? How could she afford it?

She faced the sorts of challenges that confront many first-generation college students today and especially students who come from Latinx immigrant families. Her Peruvian mother was endlessly encouraging, but just didn’t have the answers.

Elaine Townsend Utin – a proud Peruvian-American – is the co-founder and co-executive Director of LatinxEd. Through her roles, Elaine focuses on leadership and identity development to help Latinx youth be creatively, civically, and collegiately ready to lead our future in North Carolina. 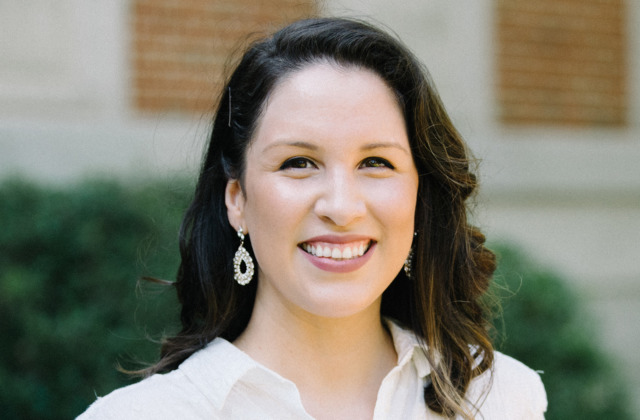 “The process of applying to college was confusing, frustrating, and lonely,” Utin said. “I ended up using Google a lot, trying to figure out financial aid and to understand words I didn’t have the context for.”

But Utin overcame those challenges, making her way to the University of North Carolina at Chapel Hill as a Gates Millennium Scholar. She graduated in 2012 with a B.A. in middle grades education. And after teaching abroad in South Korea for two years via a Fulbright English Teaching Assistantship, she went to Harvard where she earned a master’s degree.

Ricky Hurtado (’11 B.S.B.A.) faced similar challenges getting to Carolina. His parents, immigrants from El Salvador, encouraged and supported him, but had little knowledge to help him get into college.

Ricky Hurtado is the co-founder and co-executive director of LatinxEd. In this capacity, Hurtado helps lead the effort to break down barriers to success for first-generation college students and expand opportunity for immigrant families in North Carolina. 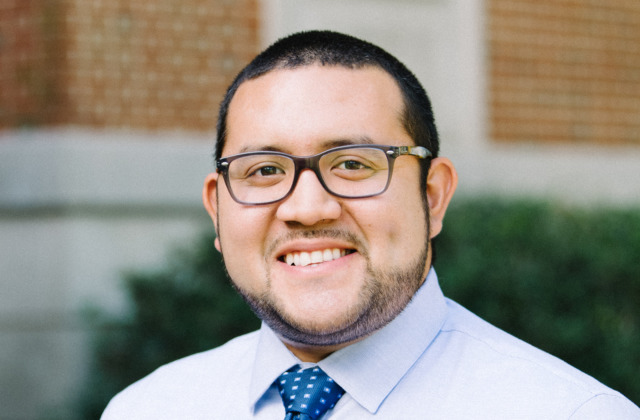 “My parents always knew that they needed to get all of their kids to college, but didn’t necessarily know how because they grew up in a completely different school system,” said Hurtado. “And so it was really the support of public school teachers and mentors that got me from high school to college.”

Like Utin, Hurtado succeeded on his college journey. He came to Carolina as a Morehead-Cain Scholar and graduated with a B.S. in business administration in 2011.

Now, both of them are back at Carolina, committed to helping Latinx students find their ways to higher education and, ultimately, uplifting future generations of Latinx leaders in North Carolina.

A growing need among the Latinx community

The need is great.

In North Carolina — which has the sixth-fastest growing Latinx population in the U.S. — Latinx students make up a growing part of the state’s student population, accounting for almost 100 percent of its public school enrollment growth since 2000.

Despite that growth, less than 4% of public university students in North Carolina identify as Latinx. By extension, the greater Latinx population isn’t represented across the state — teachers, doctors, engineers, entrepreneurs, civic leaders. Few are Latino/a. No members of the General Assembly identify as Latinx.

And that’s what Hurtado and Utin are working to change.

Guided by their own journeys as students from rural North Carolina, they hope to realize that change through LatinxEd, a nonprofit they co-direct and started in 2018 to foster a new generation of change-makers in North Carolina — starting in schools.

LatinxEd partnered with the UNC School of Education in 2019 and is housed in Peabody Hall, home to the School.

“Achieving equity in educational access and outcomes, and preparing the leaders of tomorrow are two of the major pillars of our School,” said Fouad Abd-El-Khalick, dean of the UNC School of Education. “So, this partnership is both natural and critical, especially when you consider the rapidly growing Latinx student population in our state and the staggering underrepresentation of Latinx North Carolinians in higher education and highly coveted professional careers, among other domains.”

“Dean Fouad Abd-El-Khalick saw opportunities for partnership and synergy,” Hurtado said. “And we saw a shared vision for this to become a statewide initiative acting as a thought leader and advocate for Latino students and families as we think about what it means to grow an education system in North Carolina that truly serves everyone in North Carolina.”

In its short existence, LatinxEd has already launched a handful of distinct, targeted initiatives guided by three Ls, components they see as critical to their success: Learning, Latinidad, and Leadership.

Education, particularly higher education, has always been at the core of LatinxEd, long before its founders even knew fully how the organization could help shape a better North Carolina for and through the Latinx community.

“Growing up, my mom always put an emphasis on the importance and value of education, constantly encouraging me to do my best in school,” Utin said. “When I got to college, I realized that education would be one of the biggest game-changers in mobilizing our family.”

Hurtado and Utin’s paths were doubly arduous as first-generation college students, triply so as members of immigrant families unfamiliar with the higher education system in the U.S.

When Hurtado arrived at Carolina, he joined the Scholars’ Latino Initiative, or SLI, a program started by two UNC-Chapel Hill professors that paired Latinx college students with Latinx high schoolers, creating mentor/mentee relationships with the ultimate goal of creating a more seamless path to higher education. Utin found her way to SLI as a mentor, too.

Along with other college students, they forged meaningful relationships with students not much younger than themselves and helped guide them through the college admissions process.

In 2015, after a few years of consulting work around social policy issues and after earning a master’s degree in public policy from Princeton University, Hurtado became the executive director of SLI. When he was writing a grant to expand the program, he had Utin in mind while she completed a master’s degree in education at Harvard University. SLI received the grant, and Utin joined as assistant director in 2017.

They believed in the work of SLI, but felt that more work, beyond just college access, should be done and for more Latinx youth. They envisioned connecting with Latinx students in North Carolina public schools before they ever reached high school and began thinking about the college admissions process.

In 2018, LatinxEd was born and SLI was sunsetting. Today, the mentorship component of SLI remains core to the work of LatinxEd. College y Consejos, College and Advice, provides free online college advising that centers cultura y comunidad, culture and community, for Latinx students in North Carolina.

“When it came to the personal statement asking about who you are, your purpose, and your vision for the future … I had never been asked those questions in a formal educational setting,” she said. “And on top of that, being Latina and being Peruvian, I had never been able to connect those cultural identities with school.”

What was formally missing was Latinidad.

Utin, born in Lima, Peru, immigrated as a toddler and grew up across the South, in Arkansas and Georgia before settling in Waxhaw. Hurtado, whose parents fled civil war in El Salvador, was born in Los Angeles and grew up in Lee County, where the Latinx population has grown steadily to nearly 20% since the mid-’90s, a trend that reflects that of North Carolina.

Utin was the only Latina in her class from middle school through graduation. For Hurtado, his own identity wasn’t reflected in the majority Mexican Latinx community around him. It wasnt until they arrived in Chapel Hill until they understood the importance of their Latinidad, their cultura y comunidad.

“Through my journey to higher education and in classes that I took, I realized that my identities as Salvadorian, as Latino, as the son of immigrants were what got me to college,” Hurtado said. “It changes the narrative in your mind that those things are your strengths and not your weaknesses. They’re not liabilities. They’re actually what’s propelling you forward in life.”

That’s the message they hope to convey through Somos Carolina, We Are Carolina. It’s the piece they felt was missing from SLI and has become LatinxEd’s signature initiative.

Somos Carolina supports Latinx students as rising 8th graders through their time in college, helping them become innovative problem-solvers and thrive as conscious civic leaders in their communities, while also helping them to embrace their cultural identity. Those students are introduced to Somos Carolina during a 3-week summer enrichment experience before their eighth-grade year. Instructors are Latinx-identifying and pursuing careers in education.

In summer 2019, Hurtado and Utin hosted their first summer program for 50 middle schoolers from Lee County.

“That was an incredible experience. It was the first time we were able to have in-depth conversations about what it means to be Latino in the [U.S.] South,” Utin said. “And it was powerful to have an audience that was so captivated and ready to think critically about their relationship to school, how they wanted to impact their community, and how their cultural identity could really enhance how they played those roles.

“Somos Carolina truly deepened the work we had been doing.”

Today, Somos Carolina continues to expand as high school chapters have been formed in Orange County and Lee County — establishing opportunities for Latinx students to connect to their cultural backgrounds while evolving in their roles as learners and leaders.

Combining the work of Somos Carolina and College y Consejos, LatinxEd seeks to cultivate a new generation of Latinx-identifying leaders who reflect the people in their communities across North Carolina.

Annually, LatinxEd hosts a 20 Under 20 gala, North Carolina’s only competition focused on elevating the best and brightest Latinx students across the state. Hailing from towns large and small, and from high schools, community colleges, and universities across the state, recipients embody LatinxEd’s commitment to scholarship, community, and leadership.

The event hopes to inspire a lifelong commitment to leadership at every level.

Currently, Hurtado is seeking to represent North Carolina’s 63rd district of the House of Representatives. If he wins, he will represent a district that includes portions of Alamance County. He would become the only member of the General Assembly who identifies as Latinx.

A partnership for North Carolina education

To date, the partnership between the School and LatinxEd has primarily manifested through connections. Connections with faculty members and students who are aspiring educators.

They’ve also partnered with School of Education faculty members to assess and quantify the work of LatinxEd so best practices can be shared and scaled across North Carolina and beyond.

Both Hurtado and Utin teach courses, providing students with perspectives and best practices that will help serve all of their future students, especially their Latinx students.

In Utin’s EDUC 575: “Teaching to Transform Society,” a class she has taught for two years, she provides her students with knowledge and tools to nurture Latinx students in educational spaces during the fall semester. In EDUC 576, which she teaches the following spring semester, students put lessons learned during the previous semester into practice as interns with LatinxEd.

“More and more students are coming to Ricky’s and my classes,” Utin said. “They fall in love with the School and the field of education. Several have switched their major to education, or end up minoring in education.

“What’s remarkable about my course this fall, I have a majority Latinx-identifying class. That’s the first time that has happened in any college classroom for me.

“That is so special and powerful. I am humbled and honored to be in the teacher role as this is a big responsibility and opportunity.”

For Utin and Hurtado, that’s one dream realized. But there are many more ahead to be realized through LatinxEd.